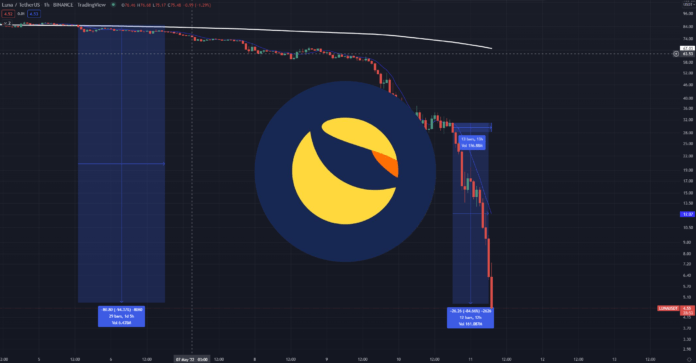 The UST collapse, in which UST lost its peg, caused luna to plunge from 68$ to 34$, the downward trend seems to be continuing. UST dropped to ~0.7$ and recovered yesterday to about $0.93 to fall again to the jaw dropping value of 0.43$.

Join Our Telegram News Feed To Be Kept Up To Date!
USTUSDT Chart by TradingView


What Happened To Luna?

During the past 13 hours, the luna cryptocurrency has lost 83 percent of its value, a drop that has never been seen before in a project that has continuously been among the top ten currencies in terms of market capitalization.

Do Kwon’s Plan For Recovery Didn’t Calm The Investors

Do Kwon, Terra’s Co-Creator, tweeted that the project was close to revealing a recovery plan for $UST and that the plan was coming closer, but according to the charts, it didn’t appear to be enough to keep the investors interested in the project.

Stablecoins, according to Treasury Secretary Janet Yellen, must be regulated by the end of current calendar year. Secretary Yellen said in a hearing on Tuesday that, although digital assets may “encourage innovation,” they may also “present hazards to the financial system,” according to the Federal Reserve.

As an update to our last article, Do Kwon...
Read more
What is

The Coti Team is happy to say that the public...
Read more
Previous article
What is the Amp cryptocurrency & Flexa – How Do They Work?
Next article
Good News: Do Kwon Finally Addresses The Terra Community Amid UST and Luna Crash